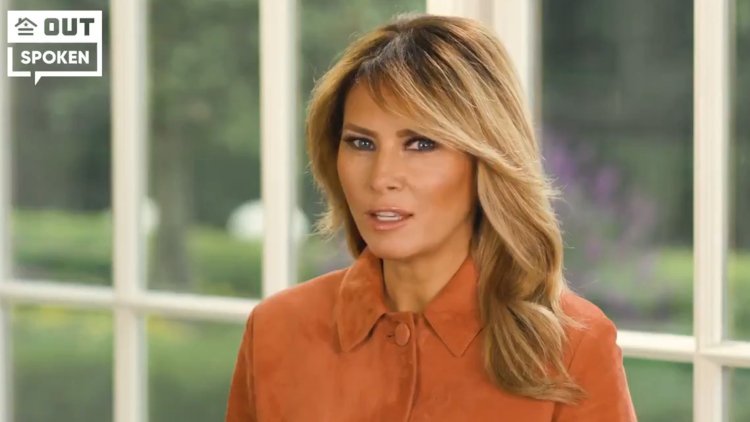 Melania Trump recently addressed a video to the Log Cabin  Republicans – an organization that claims to support pro LGBT conservatives – trying to convince the flock that the president is actually pro LGBT. It’s really the left that are the bigots.

The president’s record of undermining the rights of the LGBT community that had been gained during the last eight years, is contrary to the First Ladie’s claim. He has never showed support for the LGBT, and in many ways has harmed the LGBT. As a matter of fact, Trump is the most anti-LGBT president in modern times.

“Donald has been clear that gays and lesbians will be treated as he has always treated them – equally,” Melania told the Log Cabin Republicans, expecting them to twist themselves into pretzels while doing back flips to convince themselves that he is on their side.

“I was shocked to learn that some of these powerful people,” she said, referencing the president’s political opponents, “have tried to paint my poor Donald as anti-gay or against equality. Nothing could be further from the truth. ( My Donald has always loved the gays and the queers. They come to his rallies all the time. They love my Donald. They are so fond of him that some of them have even refered to him as Saint Donald the Patron Saint Of The Gays. And he loves them too. He fell in love with them just as he fell in love with little Kimmy in North Korea, and he writes love letters to them all the time just as he still writes love letters to little Kimmy. It’s a whirl wind romance that’s been going on for years, an affair that the liberal mainstream media has refused to cover, because they hate my poor Donny because they know he’s the greatest president in the history of America, greater than George Washington, and greater than Abraham Lincoln ).

“In fact, Donald is the first president to endorse gay marriage,” she said, neglecting to mention his numerous anti-LGBT rhetoric. “( When Donny became president, the first thing he did was liberate all the black people that Obama and Sleepy Joe had enslaved on the Democratic plantation with welfare and food stamps, and then he liberated the gays ). Donald is also the first president to appoint an openly gay official to his cabinet, ( even though he was afraid he might be accused by the mainstream media of trying to grab him by the you-know-what ).

“So, don’t you believe the liberal cancel culture mobs who are trying to silence and censor Republicans,” she concluded. “( They say we are the racists and bigots because we criticize Black Lives Matter because they’re burning down entire cities, but they are the true racists and bigots for calling my Donny a racist and a bigot.”

Laura Ingraham: Liberals Want To ‘Shame You’ For Spending Thanksgiving With Family, Not Protect You From COVID’

Fake Antifa Grifter Condradicts Himself On Fox News: ‘Antifa Hates The Democratic Party’ But Joe Biden Must Denounce Them’

After Soiling Himself On CNN, Corey Lewandowski Contracts the COVID Hoax